Ode to my Stethoscope

Doctor's Eye View of the Stethoscope 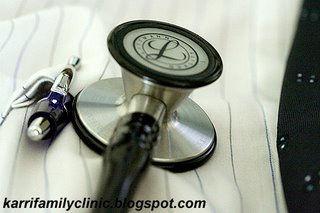 There's no doubt about it! The Sthethoscope is the ultimate icon of the Doctor. Get a model, put a stethoscope around his neck and suddenly everybody thinks he is a Doctor.

Today, I just want to pay tribute to the instrument that is closest to my heart (literally). I hope you learn something about this indispensible instrument along the way.

When I was still a young medical student last century, I remember as a first year student looking up at the fourth year student with a sense of envy. One day, I shall have that stethoscope around MY neck! How wonderful that would be! Well, after 3 torturous years of physiology, anatomy, biochemistry and other stuff that I only vaguely remember now, I made it to fourth year! My first day at the hospital was special. I got to wear my white lab coat (which nobody wears nowadays except for medical students) and I put that stethoscope around my neck. My my, I instantly felt that I could save the world!

The first stethoscope I had was a Littman's Classic. It was one of those Toyota Corolla stethoscopes. Cheap and functional. My more well heeled classmates, ie those Hong Kong Dudes who drove into Uni in their red sportscar with the number plate Doc 888 (in Sydney, you could get these) got the Littman's Cardiology, which was like the BMW of stethoscopes. But hey, never mind, it is WHO uses the stethoscope and the skill involved that counts doesn't it?

The years went by, and me and my Littman's Classic made it through Med School and I became an Intern. It was then that I realised that the Stethoscope was my 2nd most important instrument. Horror of horrors!!! The most important instrument the doctor has is not the iconic stethoscope, no, no, no. The instrument that doctors need, more than anything else, the instrument that if he does not have, he ceases to be useful to the hospital system is NOT the stethoscope......... its his pen. Without the pen, you cannot write in the patient's notes and prescribe for the patient. In other words, without the pen you are as impotent as a Eunuch on a cold winter's day.

I remember doing my ward rounds while in Concord Hospital, Sydney. The hospital was spread out so that each ward was like a standalone ground level dormitory linked by sheltered walkways. While walking from one dorm to the next, I would often swing my stethoscope round and round. (The walk was long and I was bored) I remembered thinking to myself that should some crazed patient from the psyche ward suddenly ran out to attack me, how my stethoscope can be transformed into a Nanchacku type weapon. A hit on the head with a swinging stethoscope wielded by a Bruce Lee lookalike (we chinese all look the same to Aussies so they tell me) could inflict some serious damage. And after the patient has been knocked unconscious, the stethoscope could then be used as a restraint. Thankfully, my fantasy never materialised!

Oh yes, I was going to tell you how the thing works!

Basically the stethoscope transmits sounds. So instead of me putting my ear to your chest, I can put the bell of the stethoscope (that's the round bit) on your chest instead and still hear your heart beating. (This is good because some chests are pretty hairy). We really only use the stethoscope to listen to sounds coming from the heart, lungs, abdomen and for taking blood pressure. With practise, the stethoscope can be used to tell if there are any heart problems, like valve diseases, enlargement of the heart, lung infections, asthma.

Of course if you watch a TV show like ER, the stethoscope is often used to diagnose critical conditions such as a spontaneous pneumothorax (when air is trapped in the chest cavity outside the lung, thereby collapsing the lung itself) after which the really handsome doctor (never happens in real life right?) would stab a large bore needle into the chest wall to release the air pressure built up in the chest cavity. Another day, another life saved!. Hooray for the handsome doctor. (BTW, if you look closely, the stethoscopes are all even cheaper than a Littman's classic, they use BATA (Buy and Throw away) stethoscopes or the Lada equivalent of stethoscopes! (Now you know!) 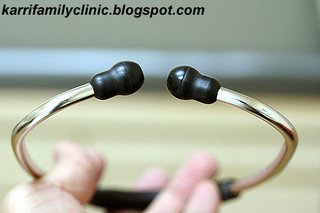 One of the commonest mistakes the parents make when I pass them a stethoscope to listen to their own kids' lungs, is that invariably they will put it one upside down. No, the stethoscope should be worn this way -->

It's quite uncanny as almost every parent will make the same mistake. Almost like a four year old who always puts their shoes on the wrong way!

Just in case you are wondering why Doctors hang the stethoscopes around our necks, I will admit that when I was a medical student, it was a matter of pride. But after a while you realise just how convenient and practical it really is! If you don't believe me, I can give you a stethoscope and you spend a day doing ward rounds. I guarantee that by the end of the day, the stethoscope will unconsciously be hanging around your neck!

Today, I sit in my comfy leather chair with my relatively brand new Littman's CARDIOLOGY II with dual diaphragms. One side for adults, turn the other side for kids! Technology keeps moving ahead with 3D CT scans now able to reconstruct the blood vessels of the heart in 3 Dimensions, BUT it will never replace my trusty stethoscope. After all, you can't possibly hang a CT scanner around your neck and still try to look good at the same time! 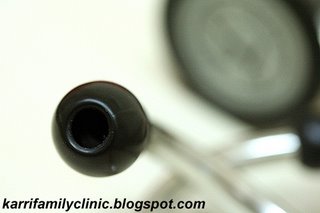 I hope you have enjoyed my little story and learnt something along the way. If you are a medical student reading this, let me give you a word of advise. Always choose a black stethoscope because it matches most shirt/blouse colours. If you are a layperson reading this and want to try using a stethoscope, may I suggest that you always check to see if there is anything in the earpiece first. Don't say I never warned you!
Posted by Dr Leslie at 12:45 PM

Labels: Musings of a Family Doctor

Hey Leslie,
Great article to read for a mid-day relief at work! I've always wanted to own a stethoscope while in pre-medical school but never knew about the product differentiation you've explained so nicely drawing an analogy from Japanese and European cars.
So, tell us more about the colours of Stethoscope, have you seen a bright green coloured one?
Cheers, Eileen

The senior consultants in Mt E like Dr Low Lip Ping and Dr Charles Toh do wear their white lab coat when they see their patients.

Haha, you are right.Pens are so valuable. These docs keep borrowing from us nurses and sometimes never return them.

Why do the black ear pieces of stethoscopes dropped off so easily? Once a Cardiologist screamed at us cos his ear was almost injured by the ward stet.:P

Yes I forgot to mention that!! A lot of the older Doctors still stick with the tradition!

Just don't attack Joe & I wif ur "nanchacku" the next time we visit you ;P

Fun stuff. Interesting that there's orientation involved with this thing. The ones we use in engineering never have such requirements.

actually i kinda think the fingers and hands important as well...especially in examination which is the most important aspect. sethoscope's position is being taken over by investigations these days. but yeah a nurse once told me that doctors wear the sethoscope around their neck and it acts like their holy weapon which garners respect from patients. haha how true these days i am not sure. btw which med sch were you from?

University of Sydney. My background is found under the About Us section

This article is indeed well written and entertaining with depth. :)

Suddenly reminds me of my OT days... my first day @ hospital ;wearing the white coat ( not doctor's coat though).... I suddenly missed my previous job....

What a hilarious yet informative read. I was in Africa and I was known to them as the female version of Bruce Lee. Else, Jacky Chan.

I have worked in a hospital & a polyclinic before. At the end of it all, I started to wonder "Why did doctors become doctors in the first place?" It's great to know that you treat people and not just their illness or disease.

it is funny...the sethoscope is also used to check the quality of hearing aids but slightly different when i was young i keep seeing pple at hospital at audiologists dept and look at them feeling scared thinking they r doctors..perharp i used to hav a fear of injection but not anymore