Help Doctor, my child fell and hit her head! 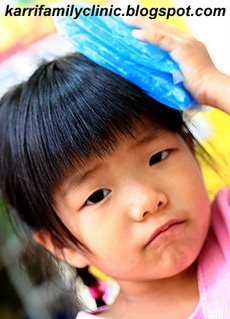 When I was young, I remember falling a few times and hitting my head on the terrazo floor and developing a Baluku (Swelling). Back in those days, my parents would not even blink an eye at my Baluku. I had 2 brothers, so invariably we would get ourselves into trouble all the time. Luckily, I did not suffer any brain damage... or so I assume.

Nowadays it is not uncommon to see parents bringing their kids to the clinic after they fell and hit their heads.

So how can you recognize if the head injury is serious? And how do you prevent a Baluku from developing?

What happens in a head injury?

The brain, which has the consistency of jelly, is housed very compactly in a rigid case – the skull—and cannot tolerate any increase in pressure. When a head injury is sustained, the most critical event that we try to rule out is bleeding or swelling of the brain which may be fatal.

How do I recognize a serious injury?

How the child injured himself is very important. In general, if you fall from a height twice the height of the child, then you should be suspicious of a serious injury. To put it in everyday terms, if the child falls from a normal bed onto a carpeted floor, the injury is unlikely to be serious. If the child fell from a double decker bed onto a marble floor, hitting the head directly, then it may be serious. Head injuries sustained in violent events such as car accidents should always be assessed by a medical professional.

What signs do I look out for?

I had a friend who consulted me over the phone last year. He said his daughter had fallen off from a bicycle and hit her head in a drain. A few hours after the event, his daughter is now vomiting incessantly. I immediately told him to bring the child to the A&E Dept. The child underwent surgery to remove a blood clot in the brain. The surgeon said that if they had waited any longer, the child might not have survived.

What did we learn?
How do I prevent the Baluku (Swelling) from forming

Get a towel and some ice or better still if you have a cold gel pack (like the one in the picture) and press it against the injured part of the head. By applying pressure and ice, you stop the bleeding underneath the skin and prevent the Baluku from forming. If you can't get ice, never mind, just use a towel and press hard over the area for 10 minutes. No towel? Just use the palm of your hand.

Do I need a Skull X-Ray?

Clinically abnormal signs and symptoms as mentioned above are much more reliable than skull X-Rays as predictors of brain injury or bleeding within the skull.

A normal skull X ray does not rule out bleeding within the skull or brain injury.

What do I do after seeing the Doctor

Continue to monitor for the above signs for the next 72 hours and return to the Doctor if you see any of the signs or if you feel uncomfortable.

More information can be found by clicking here
Posted by Dr Leslie at 7:40 PM

I did that however the next day, blue black starts to appear on the region of my child's eyes... is this normal?

Yes, that may just be the blood tracking down. However, when in doubt do have your doctor just check her out.

Hi my boy fall at school and hurt his head but I saw lightly bruise on the forehead. Would that be ok?

Hi my daughter pushed my younger daughter and she fell and hit her forehead on the training wheel of her bike (she was not riding it at the time). She cried instantly and for about 5 minutes. She has a good size bump on her forehead as well as a scrap. She seems to be fine, not sleepy or acting any differently than usual. Should i take her to emergency or just monitor her closely? She won't let me put ice or anything on it. She is 2 years old.