Just the other day a young lady asked me this question:

Hey Doc, I have been taking these pills from the Philippines and it really works! I lost 5 kg over the last month! BUT, my heart has been beating really fast and I sometimes get a headache. Do you think it is safe? They only cost me six dollars!

Let me answer the question indirectly by highlighting this recent report by the Health Science Authority concerning adverse reactions to traditional medicines.

You all may be aware of the drug called Viagara right? Viagara is the trade name the drug sildenafil. It acts by dilating the blood vessels in the penis and is useful in men with problems with sustaining an erection. 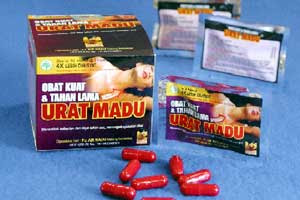 Well, the HSA reported that two illegal "traditional" herbal remedies were found to contain sildenafil. The first one was unabashed about what its capsule could potentially do for its customers. It was called "Santi Bovine Penis Erecting Capsule". (Bovine=Bull) With 32mg of sildenafil per capsule (Viagara has 50mg), it is no wonder that this "Herbal" medication could produce a Bovine sized result. The second was "Urat Madu" which contain 48mg of sildenafil. Both of these medications were reported to have caused eye problems in their unsuspecting users.

There was another drug called "Asam Urat Flu Tulang" which was used as a pain killer. One young female patient was reported to develop drug reaction to the capsule. The lab tests reveal that the capsules contained diclofenac (a commonly prescribed painkiller), dexamethasone (a steroid) and paracetamol. Little wonder it works!

Sometimes a particular herbal medication works because the medication has been spiked with known western medications. The problem is that there is poor quality control in the production of the pills so you will never know what will happen to you because of impurities. The other problem is that if you take a "Herbal" medication thinking that just because it is "Herbal" and it cannot harm you, then you might be in for a rude shock.

So my advise is to make sure you know what you are taking and don't fall for something that is both "cheap" and "effective" and can only be bought from certain obscure sources. It might cost you more than you think.