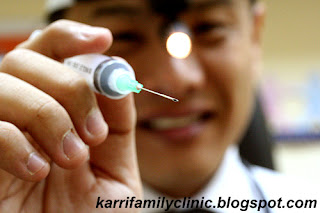 If there is one thing that most people fear most about seeing the Doctor, it is the possibility of getting an injection. So great is the fear, especially in kids, that parents sometimes use it as a threat to get their kids to behave themselves in the clinic.

A lot of the pain is psychological and stems from the fear itself. I sometimes give myself an injection when I feel really sick. At first it was very difficult because we have a built in mechanism that makes it difficult to inflict pain on oneself. But after you get over the psychological barrier, it is actually quite painless.

So the first thing about having a painless injection is to overcome the psychological barrier itself. This is easier said than done. Thankfully, there are other techniques that can help.

Surprised? I certainly was when I watched this on "Brainiac" last night. This discovery may make the fear of needles a thing of the past! The latest study published in the British Medical Journal found that the pain of injection is significantly reduced when the patient coughs hard at the time of the injection. It is thought that coughing increases blood pressure which in turn reduces the perception of pain. Not convinced? Try getting a friend to pinch your arm. Then ask him to do it again, but this time cough hard. Can you feel the difference? Link to BMJ article

This works very well for kids. The only drawback is that the anaesthetic cream is applied and you have to wait for half an hour to an hour before the skin becomes numb. Works well especially if their eyes are also covered at the same time so that they can't see what is going on.

This was the old method I used before I discovered the cough method. Essentially, I tell patients to relax and think of their favourite things or simply tell them something startling, for example, that there is a Gorilla standing behind them. Works pretty well, but the mother-in-law standing behind them may not be very happy being called a Gorilla. But you get the idea. The other way to distract is to pinch or tap the skin just prior to the injection. By the time the injection goes into the skin, the skin is still processing information about the tapping, so the pain information going to the brain from the needle has to contend with a narrow bandwidth, ie a traffic jam, so to speak.

The fear of injections is a thing of the past! Next time you need to get a jab, cough hard when the injection goes in. But please warn the Doctor first because he might miss the spot if you suddenly start jerking your body about!
Posted by Dr Leslie at 10:15 AM

I fondly remember how painless my typhoid inoculation was. ;)

Don't believe Brainiac! It's really funny, but coughing will require a moving sniper's skill on the doctor's part! =)

Does it apply to blood tast?

it should be test not tast

It should work for any kind of pain

how about labour pains?

That will take quite a lot of coughing! But seriously, I think it would only work for little things like needle pricks.

Actually I found the best way to cope with the pain is to look at it when the needle goes in. When I was a kid, I look away, and the inticipation of waiting for the needle prick was worse than when I started looking at it go ALL THE WAY IN.