How to prevent Head Bumps aka Baluku 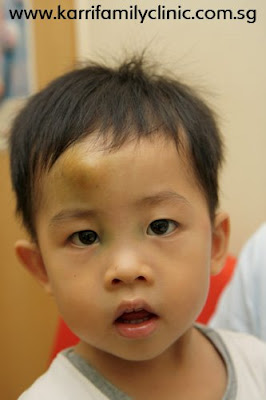 Just saw this kid with a baluku (head bump) about 3 days after he initially bumped his head against the wall. The parents were understandably worried about the greenish colouration which had appeared around the eyes.

Now, if I were to write a handbook for new parents, one of the topics that would definitely be in the book would be a short article called "How to prevent that Baluku". You know, these Balukus are entirely preventable and it is really very simple.

Balukus appear because the impact of the hard surface on the head causes injury to the soft tissue between the skull and the skin. These injured soft tissue starts to bleed and it is the accumulated blood under the skin that causes the appearance of a bump.

What happens is when you apply pressure, you stop the bleeding and an ice pack helps the blood vessels to constrict. After 10 minutes, the body's own mechanism would have stopped the bleeding so you can stop pressing.

I have two young kids and they never have the problem of balukus so you can take it from me as a parent as well as a doctor that this works very well.

So say goodbye to the baluku for good!

One word of caution, if it is a very hard knock, you should still bring your child to see the doctor to see if there is any serious head injury. You can read more about it in my earlier post by clicking here.
Posted by Dr Leslie at 8:50 PM

I was just wondering why in your clinic the doctor has to call the patient instead of the nurse/clinic staff to enter the doctor's room. I don't notice this happening in other clinics, perhaps you could train your staff to do so.

Oh, I was trained in Australia and all the Doctors there do that. I feel it is more personal to invite the patient into my consultation room rather than using a buzzer or having the nurse call.