Doctor, Is my child Hyperactive?

"Doctor, my son is always running around and can't seem to sit still. Is he hyperactive?" 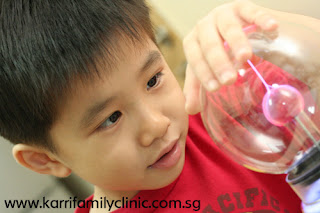 When my son was younger, he was very active and could never sit still. He would constantly be playing with toys or disturbing his friends at nursery and is always "up to something". In fact he seemed to always need stimulation. So some of my friends (from a non-medical background) proclaimed him to have ADHD (Attention Deficit Hyperactivity Disorder). I never believed them. Afterall I was the Doctor and here you have laypeople trying to tell me about health conditions? (Happens all the time, and the main culprit is my mother who still insists and telling me what to do when I fall ill, Bless her heart!)

The fact is that my son is able to sit through a whole episode of "Ultraman" completely glued to the TV. He won't move until the part when Ultraman's warning light starts beeping and when everything looks bleak, he summons up all his strenght, shoots his Killer Beam and obliterates the Monster. Then, when the credits begin to roll, he would start running around again.

Last year in Primary one, he did initially have some problems fidgeting in class and constantly disturbing his friends, but he managed to end the year with an acceptable result and even earned a certificate for best improved student. Now in Primary two, he still gets into trouble every now and but now no one would say he has ADHD anymore.

My son is active, but he does NOT have ADHD.

How common is ADHD?

As many as 40% of prescholers may be excessively active and considered to have a short attention span but only 1 in 20-30 will eventually be diagnosed as having ADHD. It is a condition more common in boys (about 6 times more common). It can present as early as infancy and seldom appears after the age of seven.

How do you recognize ADHD?

1. Inattention: This is difficulty in concentrating, following directions and forgetting instructions. If your child is able to sit down with you for 10-15 mins when you read a story or if he is able (like my son) to be glued to the TV or computer game for an extended period of time, then he probably does not have this problem even though he may seem to get distracted easily.

2. Excessive activity: Fidgeting and restless and never seems to be able to sit still. We Teochew like to say their Kah Cherng Seh Tang (Worms infesting the Backside). A child may still have ADHD even if he is not excessively active.

3. Impulsiveness: In preschoolers this may be expressed as being easily excitable, having temper tantrums, excessive crying and a tendancy to just do "stupid things" like grabbing a hot cup of Kopi or punching a strange dog. Older children may have problems completing tasks, taking turns and doing things without considering the consequences. My son for instance had a heightened sense of danger and did not take to the slides at Wild Wild Wet until much older, so he can't be said to display impulsive behavior.

1. The symptoms must appear in at least 2 situations, eg home and school

2. The symptoms usually appear before the age of 7

3. It is important not to wrongly label the child as having ADHD because it will cause unnecessary emotional distress for the child and the family! Not all children who are inattentive, overly active and impulsive have ADHD, the symptoms must be more severe then their peers and last at least for 6 months

4. Some kids who are very bright may seem to be inattentive. But when you check their work you may realise that they have completed their tasksare looking for other things to do!

What you should do

1. If your child is a preschooler, it is useful to look at how they react in a group of their peers. If they have ADHD, their characteristics of impulsiveness, inattentiveness and inattention will be much more evident then their peers.

2. If you do find that their attention span is much shorter then their peers or that their inability to sit still is very much worse than their friends, you may want to consider having him assessed by your family doctor who may then refer the child to a child psychiatrist.

3. Even if your child does not have ADHD, it is important to always protect their self esteem and praise them for positive behaviour. When asking them to do certain tasks, be very clear and reinforce the rules frequently. It helps to get their attention when talking to them by making sure they are looking at you when you talk to them. Always make sure they understand what you want them to do.

This is just a short blog to help parents recognize if their kids have ADHD. For more information on medications and therapy, please click here
Posted by Dr Leslie at 10:26 PM

thank you for this blog. at least i know that my child is only active and do not have ADHD

The ability to hyper-focus for highly preferred activities can also be an indicator of ADHD. Because your child can attend for one half-hour television program does not automatically preclude him from a diagnosis of ADHD.

I'm not saying your child has ADHD, but it can be misleading to other parents who have hyperactive children to tell them that the ability to concentrate on things like a favourite television program means that their child does not have ADHD. I'm afraid this could prevent them from getting the help the child may need. The ability to hyperfocus on video games and television programs is classic for children with ADHD.

I have ADHD myself, and know the pain of misunderstanding and misdiagnosis. I am able to hyperfocus at times when I can "shut out" the rest of the world. But most of the time, and for any kind of more mundane and repetitive activities - like paying your bills, finishing paperwork in my job, doing housework, etc, etc, I am completely reliant on my medication in order to function as a responsible adult.