Would you feed your kids ice cream that does not melt? 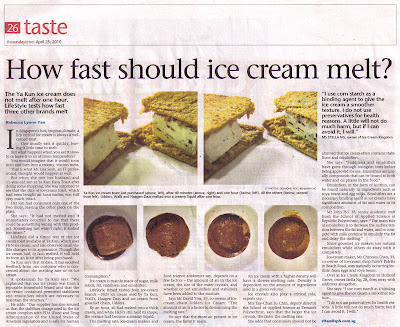 Last Sunday, there was an article in Sunday Times which talked about an unmeltable ice cream from Ya Kun.  I don't know about you, but I am very concerned about this.  As you can see, the ice cream retains it shape for an hour instead of melting into a liquid like most ice cream should. In the article, it is explained that this is because the manufacturers added emulsifiers and stabilisers to the ice cream to prevent it from melting.  According to them, the amount of stabilisers used is in compliance with the US FDA requirements so it is safe for human consumption. Remember that they also told us that Trans Fats were safe!
I don't know about you, but as a concerned parent, I have told my kids that we will avoid eating the Ya Kun ice cream toast until I can be convinced that it is safe.  In other countries, such "ice cream" would not be called "ice cream" but "ice confectionery" to differentiate it from real ice cream.  I think we as consumers need to be better informed so that we can make a decision whether to eat it or not.
We as consumers need to demand safer and better food or else we will be given whatever is cheaper and easier to handle.  I spoke with a friend of mine who runs a Cafe and he tells me that even with butter, there are cheaper ones with plenty of stabilizers or more expensive ones which have natural ingredients.  We need to reward those places who serve healthy food and voice our concerns to those who compromise on food quality. 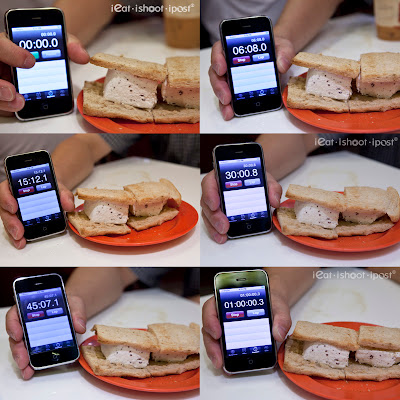 Ya Kun "ice cream" toast does not behave like ice cream!
What do you think?  Are you concerned  about this?  If you are, please write in to voice your concern!  You can write directly to Straits Times Life! at stlife@sph.com.sg and directly to Ya Kun at info@yakun.com.  The people selling food must be made to feel responsible for the food they feed us and it is up to us to make sure they know we care.
Posted by Dr Leslie at 6:00 AM

I've heard about this ST article and I'm glad the writer chose to publicize this issue. Ice cream that doesn't melt is very disturbing indeed! I suppose it's not too different than the idea of margarine, but then I also try to avoid that too.

If the "icecreams" and "ice confectionary" were properly labeled around Singapore as a differentiator, I wouldn't have as much of a problem with it. I do believe that the consumer has a right to make their own choice once they are well informed about their options.

Ohaiyogozaimasu from Tokyo!
With 2 kids, I am concerned too. Thank you for not only writing about food in your other blog but having informative posts like these in this blog. Have a good week!

it's great that you brought this up