Chickenpox: Update on the boy with complications 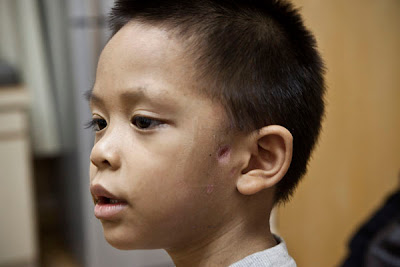 Remember the boy who suffered from the severe case of Chickenpox?  The good news is that it did not turn out to be meningitis, but the Chickenpox did leave him with a very bad scar to remind him of the entire ordeal.

He had spent one week at KK Hospital where various tests were done to determine the severity of the infection.  The pox just in front of the ear had gotten infected, so he had to be put on antibiotics and they had to perform ultrasound imaging to see the extent of the infection which had caused him not to be able to turn his neck.

After one week at KK, he was discharged but still had to be followed up by the paediatrician and had to be continued on antibiotics.  This picture is taken recently, one month after the initial Chickenpox infection and I have just certified that he was able to return to school.

I had another Chickenpox case recently where a distraught mom  recounted how she had left her child with the in-laws while she was overseas and during the time, her in-laws had another grandchild who had chickenpox and purposely exposed her child to the affected kid.  Subsequently, her child had chickenpox which left her with some scarring!

Please remember that though Chickenpox is a mild disease most of the time, it can still cause serious infection.  So please don't endorse the idea of Chickenpox parties and subject your child to the disease thinking that it is a way of getting them immne naturally to Chickenpox.  You will never forgive yourself if your child landed in hospital because of severe complications.  A better and far safer method is to give your child the Chickenpox vaccine and do also consider giving your child a second dose of the vaccine if you want to confer an higher level of protection.
Posted by Dr Leslie at 9:28 PM

is there any way to remove chicken pox scarring?

you should watch his CNA interview where that information is available... sounds ex though.