IMFed: Help for kids who don't want to eat

On the other hand, some parents are overly concerned just because their child is not as chubby as the neighbour's kid. I often have parents coming into the clinic asking for their child to be weighed and measured. I have to say that most of the time, after checking the growth charts, I reassure the parents that the child is OK.

However, there are occasions when there is something wrong and the important thing is to make a correct diagnosis of the problem. Sometimes the child is simply picky while at other times the child might actually have a fear of eating. Some kids might be sensitive to certain foods, while others actually have something more sinister, like an underlying disease which is is causing the child to be unable to eat. 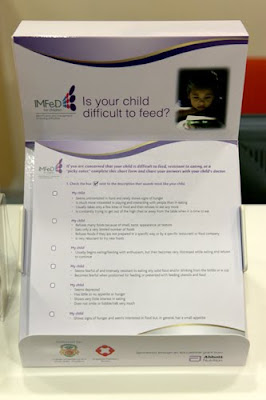 Now there is a new tool available at our clinic called the "IMFed" which stands for Identification and Management of feeding difficulties. (It's pronounced "I am Fed") This is essentially a simple questionaire where you as the parent can identify the set of problems that you face when trying to feed your child. Once the form is completed, it is fed into another tool where the doctor can help to explain the problem and advise on the appropriate management of the problem.

So for example, you might find that your child refuses to eat because of the smell, taste or texture of the food and eats only very limited number of foods. Using the tool, the diagnosis of Sensory Food Aversion is made. Sensory Food Aversion is basically a heightened sensory sensitivity in kids and the way to handle the situation is to use a strategies like trying to eat "new foods" in the presence of the child without offering any. The tool makes it very easy for the doctor, together with the parent, to identify and help manage eating difficulties.

So, if you think your child has difficulty eating, do look for the IMFed box at our counter and just fill it up and we can look at the management options together.
Posted by Dr Leslie at 6:50 PM

Is there any way that we can have a soft copy of the tool?

I am afraid there is no soft copy. This tool is to be used during a medical consultation, it is not for patients to use by themselves.

hi,
I think my daughter has severe Sensory Food Aversion. She started to stay away from ALL foods from 5mths old and she's now 5yrs. She only eats porridge and is very terrified to even try any other foods. How can i help her?

You can bring her to KKH for them to do an assessment.