Latest Developments in the prevention of Pneumococcal Disease 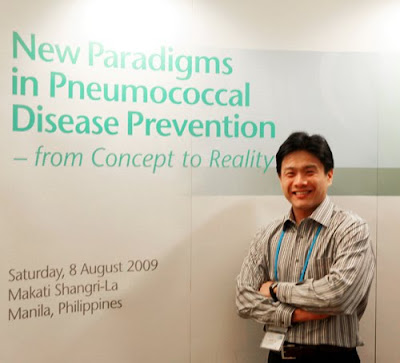 I recently attended an Asia Pacific conference highlighting new developments in the prevention of Pneumococcal Disease.

Pneumococcal Disease remains the most common preventable deadly disease in children. Every year, 1.6 million die from it. Yet, there is a vaccine available and a large proportion of these deaths could have been avoided.

One of the take home message is that Pneumococcal Disease affects kids most severely under the age of 2. Therefore it is important to start the vaccination regime from birth. By doing this, you have the added advantage of preventing nasal carriage in the child. The bacteria normally resides in the nose of individuals and by 6 months, a lot of unvaccinated babies would have this bug residing in their noses. Most of the time the bugs are law abiding citizens who cause no problems. But once in a while some become terrorists and wreak havoc by invading the brain, ears, lungs, blood, bones and some eventually get severe enough to cause death.

Although there are antibiotics against Pneumococcal Disease, there is recently been a rise in antibiotic resistance and so there is no guarantee that antibiotics are effective against the disease. The best way is still to prevent the child from getting the disease through vaccination.

Another advantage of vaccinating your child is that it also protects the rest of the family from getting the disease. The research has shown that since the introduction of the pneumococcal vaccine in year 2000, not only has the death rate from the disease been reduced in the infants being vaccinated, there has also been a corresponding decrease in the number of elderly being affected by the disease. This demonstrates what is known as the "herd effect" which basically means that by vaccinating babies, we decrease the number of persons affected by the bug in the general population because there is a higher level of immunity in the population.

Many exciting things are happening in vaccine development which we should see next year in Singapore. There are going to be new and more effective vaccines being introduced which means better protection for your loved ones.

However, you should not wait to vaccinate your child from Pneumococcal Disease. The best time to vaccinate is now because vaccinations are like insurance. The earlier you buy the better and you hope you never have to use it.
Posted by Dr Leslie at 6:01 PM

the other day i went to visit your clinic but you are not around. My son was so disappointed he didn't see you. He was hoping to receive your balloon sword again! :)

And i no longer see your sweet voice assistant anymore. One of your staff said she is no longer working. That's a pity.

Well, the young lady had to move on with her studies

Can I check if you would advise a 7yr old kid to take the vaccine? My girl is very afraid of needles and worry she might create a scene in your clinic.

The vaccine is recommended for kids up to nine.

Just bring her in and let's see if we can distract her with my levitron!

Dr. Tay, thank you for all information.
i would like to know how much cost it?
And its one time vaccination?
Thanks!

And i am wonderring your clinic turn over very high?
As saw few ladies here and seemed all different as past.
Accept 2 of them. The rest seem very weird to us family.

The pneumococcal vaccination is $170nett. If you take the baby package of 4 injection, it is $155 each but it must be paid upfront.

Dr. Tay, Thank you!
Once again Thank you so much.

just to check as i am confuse. i use to hear those below 1 yr old need to take 2 shots of the vaccination. but now i hear other saying only 1 shot for 1yr and above. wat is correct?

My kid is 11, can he still have this pneumococcal vaccine?