Croup: My Child has a Very Bad Cough! 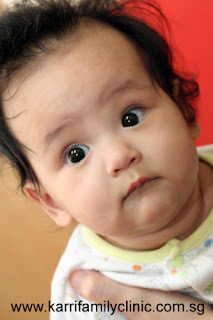 This is a common scenario in kids suffering from Croup:

Parents bring their young child into the clinic clearly very distressed (both parents and child). The child is breathing noisily and has a cough that sounds like a seal barking. Everyone is very stressed except for the Doctor because he thinks to himself: "Ah, Croup! Now I can do some magic and make myself look like a hero!"

The Doctor quickly examines the child to assess the severity of the Croup and determines that it is not severe enough to require immediate admission. He then goes to the dispensary and reappears with a dispensing cup of "magic potion". The parents then hastily force the child to drink the yucky powdery medicine to which the child protests vehemently with even louder "Barks".

The Doctor then asks the patients to bring the child out of the clinic for a while so that the other patients in the waiting room can have some peace and quiet.

An hour or two later, the parents return into the consultation room obviously relieved. The "magic potion" worked its miracle. The child is now sleeping peacefully, the noisy breathing has stopped and the child no longer coughs as severely. The parents are so appreciative and thank the doctor and nurses profusely for their help. The Doctor thinks to himself: "Gee, I love my job!"

Now this of course is a case of mild Croup and it is a common scenario that we see in the clinic. Sometimes Croup can be very severe and even fatal. So it is important to have your child checked by your Doctor who will determine if the child needs to be admitted to hospital. If you are in any doubt, just bring the child to Accident and Emergency.

Croup is a common viral infection of the upper airways. The virus affects the windpipe (trachea) and the voicebox (larynx) causing inflammation and narrowing of the airways, and hence difficulty breathing.

It usually occurs in young children between 6 months to 3 years of age, but it can affect kids up to 6 years old.

The child may start by having a runny nose and fever and then progress to have noisy breathing, hoarse voice and a loud barking cough. It is important that parent recognize when croup becomes an emergency. This is when the child looks very sick (toxic) and tired and is having very noisy breathing (stridor) at rest. Another sign that it is very serious is when you look at the chest and you can see the ribs prominently when the child is breathing in (retractions). These are signs that you need to seek medical attention straightaway.

What usually happens in cases of mild Croup?

Mild Croup can be treated without hospital admission. The illness may last around 5 days with the first 2 days being the worse. The child does not need antibiotics since it is a viral infection.

Can Croup be dangerous?

Severe croup can be rapidly fatal as the passage of air in the voice box and larynx get so narrow that the flow of air into the lungs is severely limited. The child will need to be treated immediately with a procedure to put an airway tube into the throat so as to ensure that air can get into the lungs.

In the Singapore context where clinics are readily available, it is best to just bring your child to your family doctor if you suspect your child is having Croup. If it is severe, bring the child straightaway to KK Children's emergency. However, if it is a mild case, Croup can be treated at the clinic. The doctor can give a immediate dose of steroids which can have amazing results. The child may improve markedly within 1 to 2 hours after giving the medication and can then be looked after at home. However it is important to note that the child should be observed closely over the next few hours to make sure the condition does not start deteriorating again.

The doctor may prescribe some fever medication and simple cough and cold syrups for the child. It is also useful to prop the child up and help the child relax by watching some TV or reading a book. Moist air can also be useful. You can do this by turning on the hot shower in the toilet for a while before giving your child a bath or by using a humidifier.

Croup is a common illness affecting younger children. It is usually mild and can be treated at home with the help of your family doctor. However, there are some instances where Croup can be so severe that the child will need to be admitted to hospital. So it is important for parents to be able to recognize severe Croup and seek medical attention immediately.

More information can be found here

Thanks you for sharing such
nice experience to me, i love and
so hope that the new can share with
us once a week.

Thk's for the cough news.I'm too worried when my little princess had cough and cough non stop.Hope dr have more things to share with us.

My son had a bad cough 1 month back and my mom insisted that i stop cooking chicken porridge for him. Is it true that chicken will wosen the cough? Is this a myth?

Yes it is a common belief that chicken causes cough. There is no evidence show that this is true.